Due to the Government restrictions in response to the Covid 19 virus the Club is currently closed. 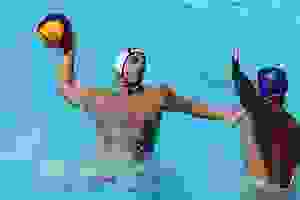 The site has details of the Matlock Water polo club, it’s people, it’s history and aspirations. It also has information about this Olympic Sport, video clips of some of the world’s top players in action and videos of some top International games including highlights of the 2019 World League Super Final. There is also a gallery of photos from the tournaments that the club has organised using the ‘Five a side’ form of the game that the club has been promoting for several years. There are also photos from the Open Water tournaments that the club organised, with the other two Derbyshire clubs, that were the largest polo events in the UK. As Water Polo is generally regarded to be the most physically demanding team sport at the Olympics there is a section on fitness and finally a section on some of the basic skills of the game in the ‘skills corner’. So, take your time, look around, and learn more about us and the exciting sport that we play. We hope you enjoy our site and please take a moment to drop us a line, your feedback will be appreciated.

February 2020 update, we are waiting for the fixtures for the East Midlands Junior competitions to be agreed and published, in preparation for these competitions our junior coach, Joe Winterbottom, has compiled a summarised version of the rules, this can be downloaded from the document download page.

The 2020 fixtures for the Men’s League have now been agreed and can be downloaded from the fixtures page.

The club began its 2020 competitive program with a home win against Grantham in the Handicap cup, in a robustly competed match the score on the night gave the match to Grantham but when the handicaps were applied Matlock emerged worthy winners and progress  to  the next  round.

we are also  planning  to  organise a five a side  tournament in May/June.

Click Below to learn the Background of our club

Officers of the Club

The Club is run by a group of dedicated Volunteers

The club is very grateful to receive financial support from local businesses and other organisations.

Any affiliated Swim England club can apply for the accreditation, regardless of the club’s size or the disciplines that the club delivers.

Interesting News Reports on past matches and Events

Building on the Matlock club’s experience of organising the Open Water Tournaments the club determined to use the excellent facilities of the ARC centre and organised a series of tournaments.

Using the ‘movable floor’ and the large pool area of the ARC centre the club acquired equipment to enable them to create two pitches in the main pool and a third pitch in the teaching pool.

For the two pitches in the main pool a ‘five a side’ format of the game was established and various tournaments have been organised involving, women’s, Men’s, junior and mini polo.

Photographs from these successful events

Matlock Waterpolo Club is a small, friendly waterpolo club that competes in the Notts Waterpolo League. This covers Nottinghamshire, Derbyshire and Leicestershire.

We have had a Mens team for over 35 years, are just starting a Women’s team and have been running a Junior Section for more than 5 years.

Within the league we also compete in two cup competitions - The Knock Out Cup, and The Handicap Cup. The Handicap cup gives teams extra goals head start based on their league position from the previous season.

We train on a Wednesday evening at The Arc in Matlock.

We run a really successful 5-a-side tournament  each year with games for all ages.

The club has a colourful history of annual tours to Europe, Isle of Mann and other UK locations.

Click here to view a photo library of some past and present players.

Roles and Responsibilities within MWPC

** any member who has concerns about any welfare matters affecting either themselves or another member can contact the club’s Welfare Officer directly via mwpc.rf@gmail.com

SwimMark (formerly Swim 21) is the Amateur Swimming Association (ASA), Water Polo’s National Governing Body (NGB), scheme that ensures that the club has the processes and procedures in place to enable us to run efficiently and effectively covering safeguarding, forwarding planning and financial planning

Many thanks and Congratulations to Richard Flint who has manfully battled through all the paperwork to ensure that we maintained the club’s accreditation with the sports governing body.

This built on the substantial work that past Chairman, Colin Ingley, put in to gain the club’s initial accreditation.

We will be making various documents available on our web site as we develop the new site.

We are incredibly indebted to our sponsors who make it possible for us to continue as a club. If you live or visit Matlock, please consider using their services to help us repay their generosity (please mention us if you do).

The Council meets on the third Monday of each month with the exception of August when they meet on the first Monday.

They have an ‘open door’ policy for all of their meetings except where confidential matters are discussed.

The club were grateful to receive a Community Grant from the Council to help meet the costs of hosting our tournaments.

Derbyshire Dales District Council, the club were grateful to receive a grant from the Council’S ‘better communities’ fund towards the cost of coach’s expenses, equipment replacement and a new web site.

Derbyshire County Council, via its Action Grants program has provided funding to enable the club to retain the services of a former International player to coach and develop the junior and senior playing side of the club.

The club also undertakes a range of fund raising activities including sweepstakes, ‘spot the ball’ competitions, raffles and sponsorship to support the costs of running a club in one of the finest facilities in the Midlands.

July 24th 2019 - “Distinguished service award” for the club’s long serving former chairman. David Frost and his wife Anne made their annual trip to the International water polo tournament in Hasselt Belgium. For many years the tournament was the focal point of the club’s annual tour when we also visited other clubs in Holland, Belgium and Germany. This year marked the 25th anniversary of the club’s first trip and whilst the club has not sent a team for several years, David and Anne have continued to attend the annual event sometimes accompanied by other club officials and friends including Reg Smith, Dave Barnard and Phil Mews.

David and Anne’s achievement was recognised in a special presentation by Paul, one of the senior figures of the Organising committee, who commented that “many people return to our event in order to try to remember what happened the previous year, but David and Anne keep coming back because they enjoy being here and we very much enjoy having them here’.

Paul then presented the couple with a special commemorative trophy to mark the occasion.

The photo shows David and Anne with the trophy, Paul on the right and Alain, another friend of the Matlock club, on the left, with club coach Jim Evans (who joined David and Anne to mark the event) in the centre.

A strong Matlock team completed their second home win of 2019 with a convincing result. Fielding a virtually full strength team Matlock showed the benefits of recent training and a team performance saw them complete a comprehensive victory that was enthusiastically applauded by their supporters.

The benefits of ‘cross sport’ coaching experience is common in modern sport, click on this link for information about a leading coach’s use of Water Polo experience.

Introduction to the sport

An introduction to the sport provided by the National Governing Body in the UK.

Links to other sources of information will be provided shortly.